These girls are a little shyer than their male counterpart, preferring the shade and anonymity of the tree and each others company. They are the same as the male in plumage, save they lack his chestnut ear-patch and his barred breast, instead opting for a more demure fawn-grey breast befitting to Ladies.

I am on a road trip through four of Australia’s seven states, I’ve travelled 2,800 kms from my home on the New South Wales north coast to the middle of South Australia. Currently house-sitting in Cooper Pedy, the Opal capital of the world. It’s a desert region and not a lot happening in the landscape but these Zebra Finches, small seed eating birds, seem to be thriving. This is a male, identified by the chestnut ear-patch. They are a tiny 10cm, like the Southern Whiteface in the previous post and the Double-barred Finch. 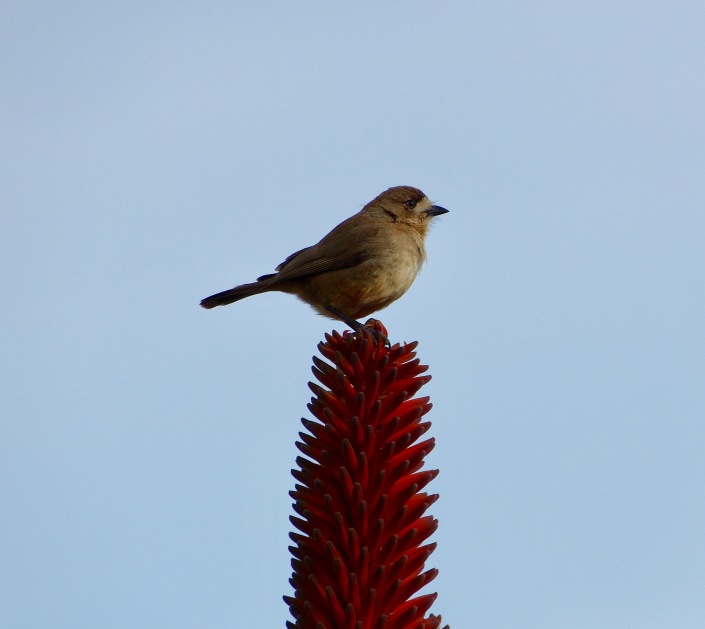 I’m a big fan of the little birds and this is the opposite end of the spectrum to the emu of the last post. Whitefaces inhabit dry areas of southern and central Australia and I captured this one in the hills east of Port Augusta in South Australia while free camping on a cattle property. The Southern Whiteface is a mere 10 cm, rather plain with grey underparts and flanks, but that cute slash of white across the face sparks them up. This little guy was atop a large succulent that was covered in these long red blooms. 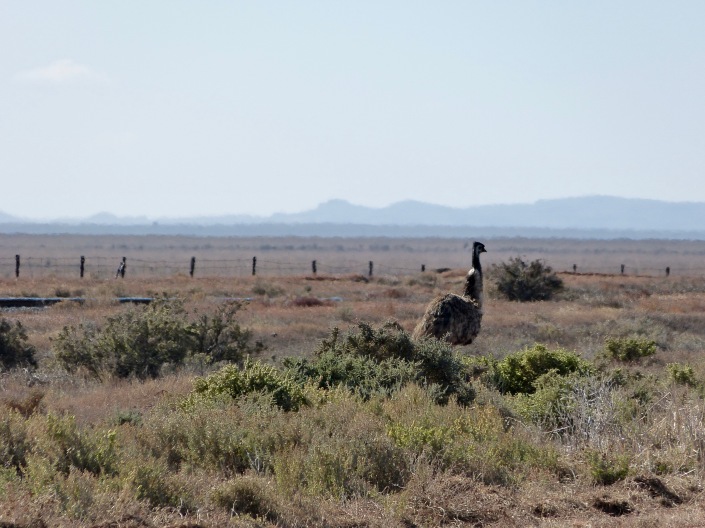 So far on my driving adventure I have driven 2800kms across two states.. yes Australia is a big country! It’s sometimes hard to be driving with half a thought for spotting birds or a scenic vista and by the time I pulled the truck over this female emu and her gaggle of offspring were well down the road, and unfortunately those cute chicks were now hidden by the shrubs. Emus are large flightless ground birds (ratites), standing 1.5 – 2 m tall, they love open country in unsettled areas. They feed on fruit, seeds and insects.

Another parrot spotted at Wilcannia, NSW. These are long-tailed green parrots with a yellow ring on the neck. This particular variety is called Mallee, different varieties having slightly different body colours but all with the distinct yellow hind-neck. They moved very quickly having a bath under the sprinkle but as it’s the only photo I have adding it to my log.

Here is another photo of the red-rumped parrot. While the previous photo showed the namesake red-rump, this angle displays the yellow breast and abdomen.

I’m partway through a road trip that will take me through ‘outback’ New South Wales, South Australia, Northern Territory, and Victoria. Hoping to spot a few different birds on these travels and here is one of the first. Red-rumped parrots are around 27cm. The males, like this one, have the bright green feathers and red rump while the females are a plain greenish brown. I spotted this one in mid-west NSW at a little town called Wilcannia. 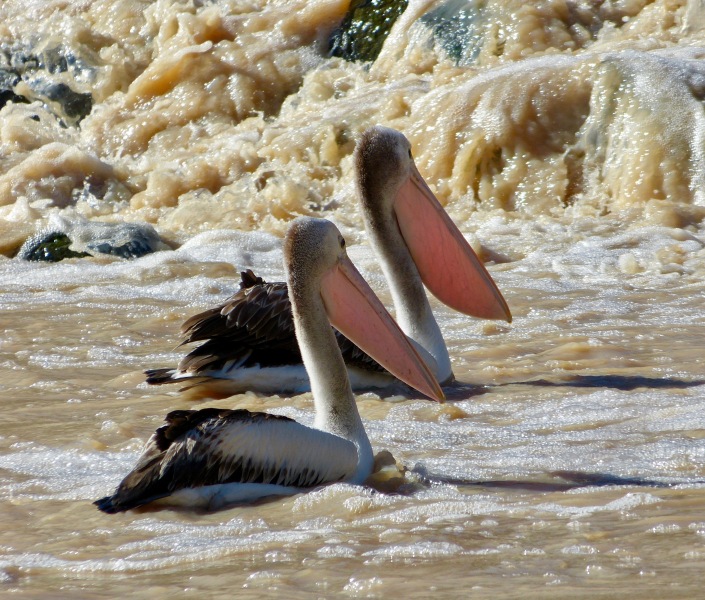 There is only one type of pelican in Australia, they are magnificent flyers and pretty smart. These pelicans had worked out that this weir, on the Darling River in mid west New South Wales, at a little town called Wilcannia, made spotting fish easy as they cascaded down the rocks. 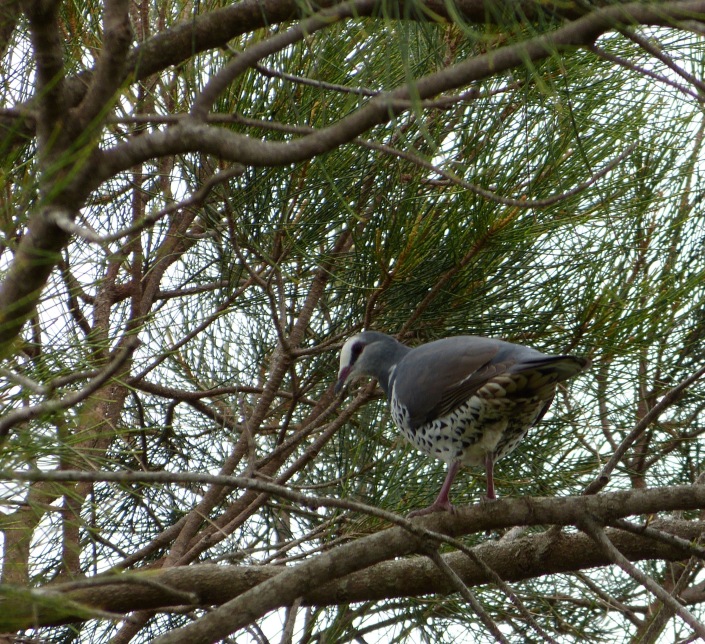 We have resident Wonga Pigeons who while endearing do test the boundaries of civility with their early morning, daytime and dusk repetitive ‘woo-woo-woo’. They are a large slate grey pigeon with a white forehead and black spots on the flank. Quite common on the lower east coast of Australia.

As an amateur birder I often draw on The Slater Field Guide to Australian Birds 2nd ed., by Peter, Pat and Raoul Slater for identification and information. It is an excellent, well illustrated guide and a credit to the many people who assisted in its production and to whom I remain most grateful. 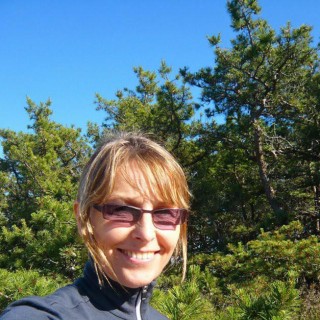 margosnotebook began as a bird log, a way to organise a growing number of photos. Sometimes I comment about everyday life or places I visit, or veer into philosophical ramblings, but birds remain a constant theme. I love Nature, the Arts, travel and quantum physics. I enjoy many activities but my greatest love is to wander into the quiet hum of the Australian bush, happy to be surrounded by trees, birdsong and scuttling skinks. For 6 years I filed my posts in a hierarchy under 12 major categories. This was particularly useful in collating my birding data. Unfortunately, while trying out new themes in May 2017 this option disappeared, instead of a drop down list under 12 major categories, each category now displays individually. I hope one day I will stumble across another Wordpress theme that reinstates my preferred log. If you know of one please let me know. Free is best!